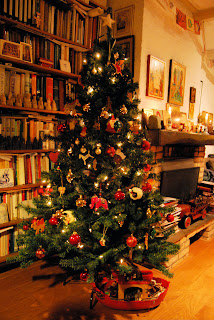 This afternoon we went out to look for a Christmas tree. We always put this off until the last minute. Christmas creeps up on you so stealthily, after all, that you don’t even realize it’s here until it’s almost too late. And this is Holland, where the big holiday is Sinterklaas, the Feast of St. Nicholas, December 5th, which is a big-time Dutch gift-giving event that is preceded by hectic shopping. By the time Sinterklaas is over the shopkeepers are exhausted, so you don’t get the frantic Christmas rush to remind you that you’d better go out and buy that tree.

Since we don’t have a car, we usually shop for a tree at the stand run by a guy who sells flowers on one of the main shopping streets in Alkmaar, within walking distance of our house. Most of the time this guy has pretty decent trees up until the last few days before Christmas. But not today. Today the trees were all sorry pine specimens that I couldn’t bear to pay good money for. What to do? We didn’t feel like tramping all over town looking for something better. It would take too much time, which is why we put this off in the first place.

For years, Jim and I have been having this low-key dispute over real tree versus artificial. Jim has been pushing for artificial. He’s the one who ends up having to hack off bits of bark to fit the thing into the Christmas tree stand. Artificial trees actually look pretty good, is his argument, and once you have one you can use it over and over again. I’m one of those nostalgic people who thinks that a plastic Christmas tree is just about the worst thing you can consider. It represents everything that our modern world has come to stand for (vacuous falseness, etc.), and besides that, it doesn’t smell like a Christmas tree. It doesn’t smell like anything.

But looking at those pathetic conifers, and then glancing over at the big department store right across the sidewalk where there was a vast assortment of Christmas products just waiting to be bought, I suggested timidly that perhaps an artificial tree wouldn’t be such a bad idea. In ten minutes we were in the V & D Christmas department, deciding whether to get the 150 cm. or the 180 cm. model. It didn’t hurt that they were 50% off.

On the way home, Jim tried to soothe my conscience by explaining that this way no tree will be cut down to decorate our home, we won’t have to water it, and it will last until Russian Orthodox Christmas (January 7) without dropping any needles. So we set it up, covered it with lights, and decorated it with the charming little things we’ve been collecting for these 26 years, and I’ll be darned if it doesn’t look great. (Still doesn’t smell like a Christmas tree, though.)

The moral of the story is this: if you’re the sort of person who could never imagine living with an artificial Christmas tree, imagine it. It’s not so bad! Loosen up! Make room for change! Let it happen.

Life around our artificial Christmas tree is fine. All is well. Jim’s new kidney is taking good care of him, and my lone kidney is being a good sport (probably because its mate is never very far away).

The kids are all doing well. Dan has been nominated the Teacher of the Year at the University of Amsterdam, Wendy is working with Musicians Without Borders and has won a valuable prize to help continue the work they’re doing setting up a Rock Music School in Kosovo, Tom and Kylie are doing well at Nike in Hilversum, Cait and Bjorn were married in May and are now expecting their first baby, a girl, in late April, and Anne has switched schools and is very happy studying art at the Royal Art Academy in The Hague. Ben continues with his home-based business helping people with their computer problems while Amy continues to direct the New Jersey Environmental Federation.

Jim has had a very productive writing year, with the publication of The Road to Emmaus: Pilgrimage as a Way of Life and new revised editions of Praying with Icons and Living with Wisdom: a Biography of Thomas Merton. Also there was his latest children's book, Silent as a Stone: Mother Maria and the Trash Can Rescue.

My mother Lorraine is still living with us. At age 91 she’s still making beautiful paintings, and Jim has set up a special part of his Flickr site to show them off (www.flickr.com/photos/jimforest/sets/72157603780115420/).

We wish you all a blessed new year. It’s going to be challenging, but we’re not going to go into that except to say that you may end up having to switch to an artificial tree, or to make some kind of change you never thought you’d ever make in your wildest dreams. Be strong and keep on loving. You’re not alone.

Nancy
(with Jim cheering from the side lines)
Posted by Jim and Nancy Forest at 1:39 PM 2 comments: