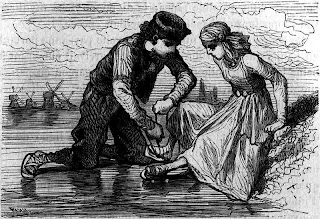 A lot of what Americans know about Holland comes from reading Hans Brinker, or The Silver Skates, a novel by Mary Mapes Dodge that was first published in 1865. It’s a great tale about a 15-year-old boy from a poor family who competes to wins a pair of silver skates. Hans Brinker is one of those rare books that not only was a best-seller at the time but has never gone out of print.

The fact that Dodge first visited the country she was writing about only after her book was in print might suggest she didn’t know what she was talking about, but in fact her research was extraordinary, in part thanks to lengthy conversations with Dutch immigrants. The result is a remarkably accurate portrait of Dutch life in the 19th century, the only problem being that the famous story-within-the story of a boy plugging a leaking dike with his finger is very much a work of imagination: when a dike starts giving way, its many leaks cannot be stopped even by a thousand fingers. 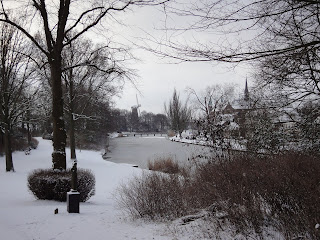 I was probably twelve or thirteen when I read the book. It left me with the impression that one thing everyone in Holland could count on every year was an icy winter. When I moved here in January 1977, I was disappointed to discover that in fact Dutch winters tend to be mild. It’s true that ice races are popular on those happy occasions when the ice is thick enough to be safe. There’s one, the 200 km Elfstedentocht, that has happened only six times in the past half century, the latest in 1997. Starting before dawn, the thousands of skaters taking part travel a route of frozen canals that links eleven towns in Friesland. It’s a very big deal when it happens, with day-long television coverage and the winner an instant national hero.

Many of the 33 winters I’ve experienced in Holland have had only infrequent snow and not much ice strong enough to support skating. But this year we’ve been having something of a “Hans Brinker Winter” -- many snow falls, days and even weeks of snow on the ground, and in some parts of the country enough prolonged sub-freezing weather for the kind of solid ice to form that skaters pray for -- though still no Elfstedentocht so far this year!

There was another snowfall last night, and snow is still falling at lunch time.

note: The photo was taken this morning in our immediate neighborhood. In the distance is the Molen van Piet, a flour-grinding wind mill that was erected about 1770. If you double-click on the photo, you'll see a larger version.
Posted by Jim and Nancy Forest at 11:37 AM 2 comments: