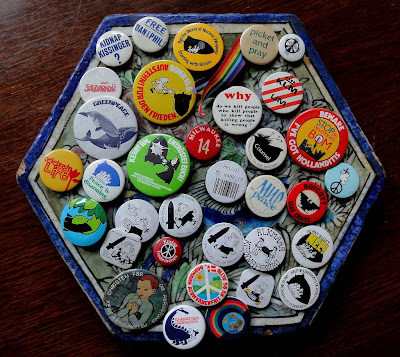 The archeologists have finished their work on the Paardenmarkt here in Alkmaar, having found lots of skeletons, one of them dating back to the Iron Age. Nancy and I have been doing a little archeology of our own right here in our house -- searching in closets and cubby holes for a large jar of peace and protest badges. Some of these date back to that remote, lost-in-the-mist era known as The Sixties, though most are from The Seventies, which was pretty much The Sixties, Part Two.

Our motive for doing so? The mother of our son-in-law Bjorn is turning sixty, an event that will be celebrated tomorrow night at a party near Rotterdam. The party theme? The Sixties! All who are taking part are requested to dress is a Sixty-ish way.

Thanks to our success in finding the elusive jar, Nancy and I will be wearing some of our peace button collection.

the quick and the dead 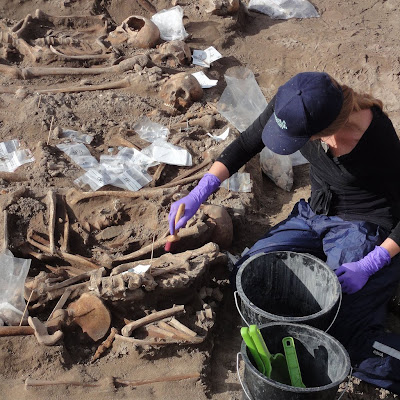 Since the end of June, every week day, even in wet weather, archeologists have been hard at work in central Alkmaar looking underneath what for decades was a parking lot and, before that, a horse market. It’s this older role which gives the square its name to this day: the Paardenmarkt. It’s a two- or three-minute walk from our front door.

The archeologists -- most of whom appear to be students -- come both from the University of Leiden and Hollandia, a Dutch archeological research company based in Zaandijk. The project was commissioned by the city of Alkmaar after the decision was made to create a small park where the parking lot had been -- work that would involve disturbing the ground.

I’ve learned some history. Before the horse market, Franciscan friars lived here, members of a community founded in 1448. As they were educators, they must have run a school. Their friary stood on the east side of the square, with a walled cemetery where the digging is now going on.

The Reformation hit the Catholics of Alkmaar with hurricane force. In 1566, there was the “Beeldenstorm” -- the "image storm." Religious paintings were damaged or destroyed and stained glass windows and statues smashed. The only two statues to survive in the town’s cathedral were too high up for the vandals to reach -- no ladders were long enough. Another result of the Reformation, and the nationalism intertwined with it, was that the friars’ chapel was turned into an armory and foundry for making cannons.

In 1573, during the Eighty Years' War, when troops of King Philip II of Spain surrounded the town in an effort to defeat a Protestant-backed Dutch uprising, a small section of the cemetery was used for the burial of victims of the siege. The discovery of the mass grave was headline news throughout the Netherlands. (It was in Alkmaar that the first victory over Philip II occurred, thanks to local farmers breaking dikes, thus flooding the area used by the occupation soldiers.) A lead musket ball was found in one of the skulls, leading to the guess that this victim was Jacob Paulet, shot in the head on the 8th of September 1573 by a Spanish sentry when Paulet took the chance of looking over the wall.

For many people the mass grave -- all those skulls and bones, with their many indications of mortal injuries -- brought the siege of Alkmaar to life. The year 1573 suddenly seemed not so long ago.

In 1574, following withdrawal of the Spanish forces, the six surviving Franciscans were arrested, taken to the town of Enkhuizen and hanged. They are remembered as “The Martyrs of Alkmaar.” The former Franciscan cemetery became a market square and retained that role until the 20th century, when a horse market was less needed than a place to park cars.

The biggest surprise to date, even more than the mass grave, was the discovery three days ago of the remains of someone -- whether man or woman is unknown -- who died about 700 BC. The traces of bone, teeth and spine that are left are hardly more substantial than a shadow. While there has been evidence of human occupation in this part of Holland dating back to 1500 BC, it seems no burial this old has previously been found in this area. The body had been laid on its side with the knees drawn up so that they nearly reach the chin -- an Iron Age grave in the heart of Alkmaar!

Since the digging started, I’ve been spending a little time most days watching the excavation -- the careful removal of sand centimeter by centimeter, the repeated sweeping of each square meter with a metal detector, the regular discovery of skeletons, the making of photos and charts, the gentle freeing of the bones from the earth. (These are to be reburied in the town’s main cemetery.) So far about 150 skeletons have been found.

I’ve saved some of the photos I've taken to this folder:

The present is fascinating, but at times the past can be even more interesting. It’s also quite moving to watch healthy young men and women armed with plastic spoons and soft brushes ever so gently unearthing the long-buried dead.

I’ve been thinking about how a project like this brings into high relief the tremendous importance memory has in our lives -- not only one’s own private memory, but the gradual expansion of memory to take in other lives, including lives and events in the remote past.

If I were a kid watching all this, maybe I would grow up to be an archeologist.