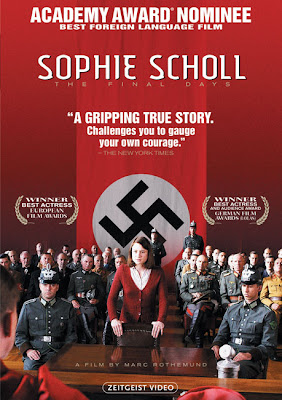 Nancy and I watched "Sophie Scholl" last night, a remarkable film about courage, faith and martyrdom.

Arrested on the 18th of February 1943, 21-year-old Sophie was beheaded four days later. She and her brother Hans, a medical student, were members of The White Rose group based at the University of Munich. The group's first activity had been the distribution of a sermon by August von Galen, the anti-Nazi Catholic bishop of Munster, in which he denounced Hitler’s euthanasia program.

The group managed to publish and widely distribute six leaflets before they were caught. An extract from one leaflet: "Who among us has any conception of the dimensions of shame that will befall us and our children when one day the veil has fallen from our eyes and the most horrible of crimes—crimes that infinitely outdistance every human measure—reach the light of day?"

The film focuses on Sophie and Hans from the evening before their arrest until their execution.

It's clear that their religious faith was a key element in their actions.

Jim
Posted by Jim and Nancy Forest at 12:43 PM No comments:

The Battle of Blair Mountain

When Alex Patico and I were driving from the Patico home in Maryland to Murfreesboro, Tennessee a few weeks ago, we stopped midway in Charleston to visit a friend and spend the night at a bed & breakfast. There we happened to meet a West Virginian who mentioned a significant event in the state’s history, the Battle of Blair Mountain. She referred to it as if you would have to be a piece of driftwood not to know about it. For me, it rang only the faintest of bells. I’ve since had an e-mail from our chance acquaintance with a link to a Wikipedia text about this important confrontation between the owners with their private army and the men who mined the coal. To be a union organizer, or even a union sympathizer, was to invite your own murder. The miners were treated pretty much as slaves, if not worse. During the Battle of Blair Mountain, the US military intervened, dropping bombs.

Elements of this story made their way into the film “Matewan.”

Jim
Posted by Jim and Nancy Forest at 1:26 PM No comments: