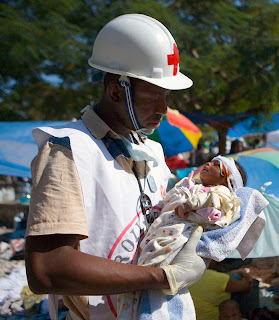 I had a letter today from a friend whose faith has been profoundly shaken by the devastating earthquake in Haiti, an event insurance companies put in the category of “acts of God.” How could God cause so many desperately poor, defenseless people to suffer in this way?

Here is an extract from my response:

So-called “acts of God” -- earthquakes, tidal waves, droughts, floods, etc. -- definitely challenge the idea most of us have of God. What we can know about God is far more limited that what cats can know about people. For many people, the idea is that God runs everything -- from the weather to the stability of the earth. You might call it the “God-as-babysitter” idea.

My own concept of God, inadequate as it is, is quite different. God has given us a very uncertain place to live, and not only does God not protect us from each other (as we see in every war, and see in its most dramatic form in Christ’s crucifixion), but also doesn’t protect us from the unsettled planet that is our home. Among the things that are remarkable about the Christ’s Gospel is that it has to do with how to live in a world that is extremely dangerous, unpredictable and unfair.

I sometimes think about writing a book on various ideas of God that many people embrace but which are profoundly inadequate and which we need to move beyond. Doing so is very scary -- we fear we are losing God altogether -- but all we’re doing is moving into ever-larger rooms. The one constant is that Christ is with us as we make this journey.

It was remarkable to see several news clips made in Haiti after the earthquake in which, to my astonishment, people were singing songs of praise. It is very hard for us to imagine doing the same if we try to project ourselves into similar circumstances. But I think of that attitude -- much rarer in the rich countries than in the poor ones -- when I look at the Haitian wood carving that hangs on the wall in our living room.

(double-click on images to enlarge)
Posted by Jim and Nancy Forest at 12:06 PM 4 comments: 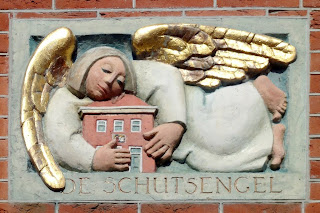 One of the advantages of being over 60 in Holland is that every two months I get a free train ride wherever in the country I want to go. This time it wasn't far -- to the town of Monnickendam and the nearby island village of Marken, both in the province we live in, a district called Waterland in North Holland. As the name implies, Monnichendam -- meaning a dam with monks on it -- has monastic origins. (In fact there is no train to these towns, but it's not a long bus ride northeast of Amsterdam's Central Station.)

A folder of photos of these two Dutcher-than-Dutch places is here:

What helped me decide to travel near rather than far was a photo I recently saw of a "gevelsteen" (a facade stone sometimes placed on houses) of a guardian angel holding the house. Inspired work. I'd love to know who carved it. Note that the gevelsteen is replicated in miniature in the angel's arms.

I have a long-running love affair with these remarkable bas reliefs, many of which date back to the 17th century, though it's very much a living art form, as you see in the case of the guardian angel -- an carving just a few years old. A folder devoted only to gevelstenen is here:

Note: Double-click on the photo to see it enlarged.
Posted by Jim and Nancy Forest at 11:04 AM No comments:

thyme on my hands 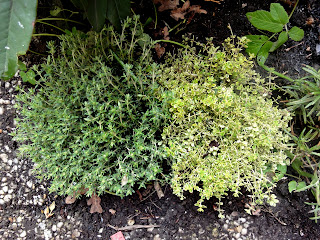 A favorite saying of my mother was "Time, time, said old King Tut, is something I ain't got nothin' else but." But I was into a different sort of thyme yesterday,thyme that's planted rather than measured, and in two varieties: Thymus Vulgaris (on the left, ordinary thyme, not nearly as vulgar as its Latin name suggests) and Thymus Citriodorus Aureus (thyme that has a slightly lemonly edge). This thymely couple is handily planted just outside our kitchen door.

Jim
Posted by Jim and Nancy Forest at 7:18 PM No comments: