an image of paradise 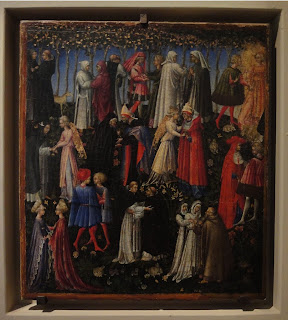 Two days ago we returned from a three-week stay in Tuscany. Mainly we were there to work, Nancy on a translation project and me to make headway on the new edition of my biography of Dorothy Day.

I find this painting is an especially haunting image of the door into paradise: forgiveness. The painting was part of a temporary exhibition -- "The Arts in Siena in the Early Renaissance" -- at Santa Maria della Scala in Siena, an ancient hospital that in recent years has become a museum. Double click on the photo to see, in a larger size, different sorts of reconciliation.

The artist is Giovani di Paolo of Siena. He lived an exceptionally long life -- 1398-1482. This work is dated 1445. It was loaned to the exhibition by the Metropolitan Museum of Art in New York.

If you stand even more Tuscany photos, here is a folder from our two-week stay in Poderetto, a hamlet not far from Sovana and Sorano: http://www.flickr.com/photos/jimforest/sets/72157624064407075/

Jim
Posted by Jim and Nancy Forest at 10:08 PM No comments: 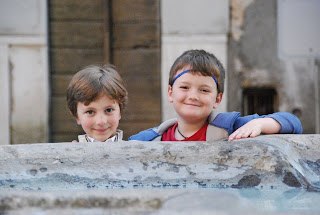 Our second week in Poderetto.

The best thing about these days in rural Tuscany is that there is no internet connection in the house in which we’re staying. I would be surprised if there are two web-connected households in Poderetto. It’s barely a hamlet, perhaps ten or twelve houses. What matters most here, apart from family, are the olive trees, the grape vines, the farm animals. No shops. There’s a small grocery store in the village of Elmo a few kilometers away. Not far away there is the slightly larger village of Sovana, where we’ve twice gone for pizzas. A little further there is Sorano, a real town, and still further, perhaps fifteen kilometers away, is Pitigliano, the main commercial center of this region, dramatically rising from a steep hilltop.

Mainly we’re here in Poderetto. A quiet life! We’ve done amazingly little actual tourism. I’ve been quickly checking e-mail once a day at the nearby house of our hostess -- and Nancy’s translator colleague -- Diane Webb, opening almost nothing and responding only to a few e-mails, mainly those having to do with our forthcoming stay (the third and final week of our time in Tuscany) at monasteries in Siena (two nights) and then Florence (four nights).

This internet withdrawal has allowed me a kind of attentiveness to writing, revising and expanding my biography of Dorothy Day, still in print but 25 years old, but written when I had no access to Dorothy’s journals and correspondence. As it happens, the one translation of the new edition so far contracted is with an Italian publisher.

I’ve rarely known a similar opportunity for such tight-beam focus on writing, but especially in these years of e-mail. A truly monastic silence. How much more I could have done as I writer if I had been more focused on writing and paid less attention to correspondence!

It’s much the same for Nancy, who is spending most of each day concentrating on a translation project she, Diane and Lynne Richards are doing as a team, the collaborative enterprise that brought us here. (Lynne is staying at Diane’s house -- the “new house” -- just a short walk down the hill.)