In praise of Dante 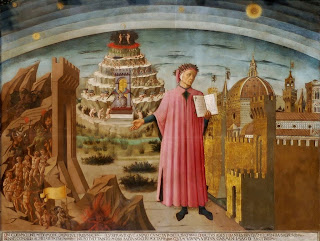 Prodded by a question from a friend who has been looking at the photos I took last month in Tuscany, I asked Harry Isbell, who has translated for Penguin and other publishers some of the Latin classics, if he could unravel the text at the bottom of the Dante portrait by Domenico di Michelino that hangs in the Duomo in Florence. Smaller image above, a high resolution version here:

In my experience the art historian crowd does tend to gloss over anything that looks like an inscription, even at the risk of abandoning a vital piece of context which can very well illuminate the work at hand. This is no exception.

Every inscription of course is complicated by the fact that the realities of cost always demanded condensation and abbreviation. For this reason it is necessary to begin working with what would appear to be an unshrunken fragment. Voila. The inscription is of a poem, possibly by Michelangelo, though I'm far from sure of that, which reads

Who sang of Heaven, and of the regions twain,
Midway and in the abyss, where souls are judged,
Surveying all in spirit, he is here,
Dante, our master-poet. Florence found
Oft-times in him a father, wise and strong
In his devotion. Death could bring no harm
To such a bard. For him true life have gained
His worth, his verse and this his effigy

The translation considerably more verbose than the original, is by E.H. Plumptre D.D., Dean of Wells and was published in 1899 in his 5 volume work, "Dante: The Divina Commedia and Canzoniere."

Another translation, by Edward Wright in 1730 reads

Behold the poet, who in lofty verse
Heav'n, hell, and purgatory did rehearse;
The learned Dante! whose capacious soul
Survey'd the universe, and knew the whole.
To his own Florence he a father prov'd,
Honour'd for counsel, for religion lov'd.
Death will not hurt so great a bard as he,
Who lives in virtue, verse, and effigy.