Church and State in the Russia-Georgia Conflict 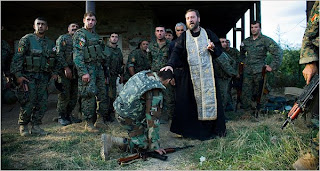 The recent Georgia-Russia mini-war in and around South Ossetia was definitely not a religious war, but serves as a reminder that religious identity doesn't even come in third place when issues of national identity are at issue. While the battle raged, the majority of participants -- and casualties -- were Christians on both sides.

In both countries, the Orthodox Church -- in practice, though not officially -- functions as the national church. Russia has an icon of St. George at the center of its national coat of arms; the average Russian atheist regards himself as an Orthodox atheist. Georgia prides itself on having adopted Christianity in the 4th century, six centuries before the baptism of Russia.

No matter how borderless Christianity is in theory ("neither east nor west, neither Greek nor Jew"), in practice national borders are as substantial as cathedral walls.

The Orthodox churches in Russia and Georgia -- led by Patriarch Alexei in Moscow and Patriarch Ilya in Tbilisi -- are no exception. It's rare for either church to stand in opposition to its government. The Russian Orthodox Church has been especially notable for being quick to bless Russia's military -- and has been all but silent in voicing criticism about Russian actions, no matter how brutal. Patriarch Ilya also has been equally silent about post-Soviet Georgia's deepening association with the United States and the US-sponsored military buildup that has resulted.

Thus it has been a surprise to note the efforts made by the leaders of both churches first to prevent the recent war and then, their efforts having failed, to speed its end.

Ilya seems to have been the one who took the first step. In April he sent a letter to Alexei in which he noted the potential "role and authority of our churches to prevent the escalation of tensions and help restore good bilateral relations."

While Alexei's response has not been made public, is likely that he intervened with Russia's president and prime minister (he is on close terms with both Medvedev and Putin) in hopes of encouraging renewed diplomatic efforts to prevent conflict.

But when Georgia's military bombarded Tskhinvali, the capital of South Ossetia, on the night of August 8, hopes to prevent war were shattered. (What lay behind Georgia's action is baffling. It was something like Connecticut opening fire on New York. The Russians had already made clear what would happen in such a case. Georgia's small army hadn't a chance against Russian forces. Was President Saakashvili imagining that America, his military sponsor, would join the battle? Had he even been encouraged to open fire? I'd love to know.)

What is remarkable in the context of the days that followed was Patriarch Alexei making a public appeal to the Russian state to declare a cease fire.

"Today blood is being shed and people being killed in South Ossetia," he said, "and my heart deeply laments over it. Orthodox Christians are among those who have raised their hands against each other. Orthodox people, called by the Lord to live in fraternity and love, confront each other."

In a sermon given in Tbilisi two days later, Patriarch Ilya said that "one thing concerns us very deeply -- that Orthodox Russians are bombing Orthodox Georgians."

Note that when Alexei made his appeal, he was definitely not acting as the Russian government's amen chorus. At the time, Russia's leaders were strongly resisting international pressure for a cease fire. It seems likely Russia was hoping, war having begun after years of tension, to seize the moment to bring South Ossetia, bitterly with odds with Georgia for many years, into actual rather than ex officio inclusion in Russia -- a goal Russia is still pursuing, but at present without warfare with Georgia.

I'm an Orthodox Christian (and American) currently living in Georgia, and can say that (while I admittedly didn't know much about this situation before coming) no Georgian I have met actually believes Georgia did this. My Georgian family saw the bombing from their house. Russia is constantly on the news saying that Georgia started it. But if so, why haven't they stopped their occupation of places in Apkhazia and Ossetia, leaving so many Georgians in such bad conditions. The soldiers came in blood-hatred, raping, slaughtering, and even hanging the helpless victims as the whites of the Southern United States did all those years ago in racism against those of darker skin. I personally truly believe that Russia started it, as every Georgian I have met does. Otherwise the current state of things simply can't be accounted for.