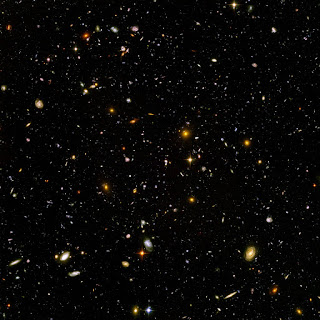 Re the photo: this is a Hubble view of deep space sent to us by the friend who sent us the link to the Ten Dimensions film.
Posted by Jim and Nancy Forest at 12:04 PM

Hi! I just wanted to let you know that I enjoyed both the videos and your observations. I shared them with a very good friend who is a homeopathic physician. Although a spiritual person, she has never seen the purpose of labeling and defining God. She shys away from organized spiritual endeavors and chooses to quietly concur with many perceptions of "God". Your response to your friend was wonderfully honest and logically presented...(to me anyhow) Thank you for sharing it, and if you decide to expound on your elucidation, and I hope you will, I hope you share that with us too!