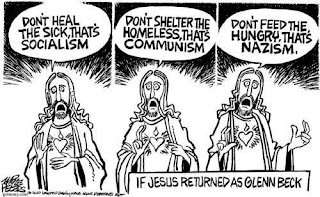 I live a sheltered life, that is to say I watch very little TV. Until yesterday I had never heard of Glenn Beck. But when a friend in Kentucky sent me an e-mail asking if I was aware that Dorothy Day had been mentioned on Glenn Beck’s weekly TV show, I got curious. Via YouTube, I quickly discovered that Glenn Beck is more than willing to accuse anyone he doesn’t agree with of being a socialist, a communist, a marxist or a nazi, or even all four.

During his latest Fox News broadcast, Beck made mention of Dorothy Day, founder of the Catholic Worker movement, best known for its many houses of hospitality for the down-and-out.

Here’s how Dorothy Day got into it:

Glenn Beck: “Rev. Wallis told a story a couple years ago about the time he met — apparently Marxists know this person, I've never heard of her — the Marxist Dorothy Day. Listen to this:”

WALLIS: “My Dorothy Day story happened in Chicago. She was just leaving as we were coming on the scene. So we were living in Chicago. So I ran 20 blocks. And in the parlor of the Catholic Worker -- and in walks the great lady. Dorothy wrote a book about her life called "Love is the Measure." But she wasn't ever soft. Very tough. So you're a radical student like me, right? You're a Marxist like me, right? Yes.” (END AUDIO CLIP) [The part of the interview that followed, in which Day and Wallis talk about their conversion to Christianity was left out.]

Before the day is over, I must send Glenn Beck a thank you note. Thanks to his broadcast, sales are likely to pick up for the one book mentioned in his broadcast, “Love is the Measure.” Actually, it’s a biography of Dorothy Day that I wrote. Jim Wallis probably intended to mention Dorothy’s autobiography, “The Long Loneliness.”

But what is most helpful about Glenn Beck’s broadcast is that, among the millions of people who reportedly listen to his programs, there are bound to be a good many who are curious to know just who is this Dorothy Day.

The web being so helpful for quickly finding out whatever you want to know, without too much trouble they will discover that “the Marxist Dorothy Day” Beck referred to is known in the Catholic Church as “Servant of God Dorothy Day.” The title is granted by the Vatican when it officially decides to consider beatification or canonization of a particular person.

The process was begun in 1997 by the late Cardinal John O’Connor, Archbishop of New York. Here are extracts from what he said at the time, speaking from the pulpit of St. Patricks’ Cathedral in New York:

“She had died before I became Archbishop of New York, or I would have called on her immediately upon my arrival. Few people have had such an impact on my life, even though we never met.

“Dorothy Day was born on November 8, 1897, and died November 29, 1980. Hardly a seminarian of my era escaped her influence. Rare was the young priest untouched by her life. Whether or not we honored in our own lives, her passionate commitment to the poor, or followed even distantly in her footsteps, she worried us. That was her gift to us, a gift I still cherish as I try to maneuver my own perilous way among the accouterments and ‘practicalities’ of life as a Cardinal Archbishop of New York...”

Dorothy Day, Cardinal O’Connor noted, had aborted her first child when she was a young woman:

“I wish every woman who has ever suffered an abortion, including perhaps someone or several in this church, would come to know Dorothy Day. Her story was so typical. Made pregnant by a man who insisted she have an abortion, who then abandoned her anyway, she suffered terribly for what she had done, and later pleaded with others not to do the same. But later, too, after becoming a Catholic, she learned the love and mercy of the Lord, and knew she never had to worry about His forgiveness. This is why I never condemn a woman who has had an abortion; I weep with her and ask her to remember Dorothy Day’s sorrow but to know always God's loving mercy and forgiveness....

“Radical though she was, her respect for and commitment and obedience to Church teaching were unswerving. Indeed, those of us who grew up knowing her recognized early in the game that she was a radical precisely because she was a believer, a believer and a practitioner. She, in fact, chided those who wanted to join her in her works of social justice, but who, in her judgment, didn't take the Church seriously enough, and didn't bother about getting to Mass.

“There are some who believe that Dorothy Day was indeed a living saint, and that the cause of canonization need not therefore be processed. Perhaps. But why does the Church canonize saints? In part so that their person, their works, their lives will become that much better known and that they will encourage others to follow in their footsteps. And, of course, that the Church may say formally and officially: ‘This is sanctity, this is the road to eternal life, to feed the hungry, to clothe the naked, to house the homeless, to love every human person made in the image and likeness of God.’ It is this and nothing else: Our Lord summarized it all -- ‘You shall love the Lord your God with your whole heart, your whole soul, your whole mind, your whole strength and your neighbor as yourself.’

“I wish I had known Dorothy Day personally. I feel that I know her because of her goodness. But surely, if any woman ever loved God and her neighbor it was Dorothy Day!”

My own blog post on this issue, for your reference:

Jim - I have to remind myself to check your blog more often. I had not heard Beck's reference to Dorothy, although his attack of churches that preach social justice has been the topic of much conversation here. If nothing else his comments can provide an opportunity for clarification of thought and for sharing the good news of the Gospel and of people like Dorothy Day. Thanks again for your wise observations.
John

Most troubling is the dangerous, popular vein of Orthodoxy in the States that is in support of Beck. If you've not seen, God help them!

I found a copy of your biography of Dorothy Day in the local university library, and when I've finished it will write a review on my blog. In the mean time I've recommended it to friends.

I read this piece in the last issue of the "Houston Catholic Worker" - a paper I look forward to receiving in the mail (and a worthy cause).

Beck is a strange one - from what I've heard of his show. He can switch from right-wing funny man to "helter-skelter's comin' down fast" apocalyptic hysteria between commercials.

Nice piece of writing about Dorothy Day you did there.