All Is Grace: two more reviews 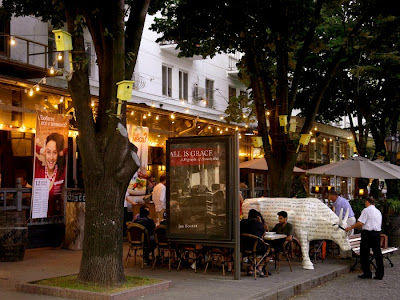 A publisher once told me, "Writing books is hard -- almost as hard as selling them." One of the chief ways a book gains readers is through reviews. I've been lucky with All Is Grace. There have been at least twenty so far. Here are two of the latest.

PS The most recent spotlight on the book is not in print but was a conversation with Timothy Dolan, Archbishop of New York, recorded earlier today for use on his weekly radio program, "A Conversation with the Archbishop." It should soon be available on Sirius XM Satellite Radio (http://www.thecatholicchannel.org).

As a young woman, Dorothy Day twice lived with men outside of marriage (obtaining an abortion at the insistence of the first and bearing a child by the second), partied with the likes of Eugene O'Neill and was once employed as secretary to a founder of the American Communist Party.

Hardly appearing a likely candidate for sainthood under the above description, this remarkable 20th century woman's eventual conversion and devotion to the Catholic faith and her intense commitment to the poor and social justice would indeed see her, 17 years after her death in 1980, proposed for sainthood by none other than Cardinal John O'Connor, archbishop of New York. The cause for her beatification and canonization was approved by the Holy See in 2000.

Day herself was uncomfortable with being referred to as a saint during her lifetime. "I don't want to be dismissed that easily," she said. Still, she strongly believed that all are called to be saints, noting, "Sanctity isn't for the few but for the many, not for the exceptional but for the ordinary."

Author Jim Forest, who personally knew and worked with Day, has brought together in "All Is Grace" the various facets of her life to paint a compelling portrait of an ordinary woman who rose to the extraordinary.

Born in Brooklyn to a decidedly anti-Catholic father, a newspaper man whose profession Day would later pursue, her family lived a life of economic ups and downs that took them first to San Francisco, then Chicago. Along the way, Day would stumble onto religious faith, first, through a Methodist family next door and, later, a Chicago neighbor's story of a saint that moved her deeply.

It was through her older brother's job at a newspaper that exposed harsh working conditions that the teenage Day first became acquainted with the American labor movement and the "Left." Her reading would continue to draw her in the direction of the plight of the poor and she would later describe her exploration of the slums of Chicago as her first experience of finding beauty in the midst of desolation. No longer viewing the poor as shiftless, worthless people whose plight was their own fault, her life would become more inextricably linked with theirs as time went by.

In 1914, 17-year-old Dorothy began studies at the University of Illinois. An insatiable reader, she was especially taken with Dostoevsky, as well as other Russian writers, and she eagerly consumed histories of the labor movement. Haunted by the victims of social injustice in the laborers and their families she was surrounded by daily, she grew increasingly disturbed that more was being done to provide relief for the victims of social evils than doing away with the evils themselves.

Two years later she abandoned her schooling to move back to New York, where she found the poverty of New Yorkers even worse than in Chicago. Here she rose through the reporting ranks at various reform-minded publications, beginning with the Socialist daily, The Call, and became involved with ground-breaking social movements of the day, including labor union strikes, socialism, women's suffrage and pacifism.

Later years would find her championing César Chávez and the California grape workers' strike and protesting U.S. involvement in the Vietnam War. She would be imprisoned more than once for civil disobedience, the final time as a frail, 75-year-old in 1973.

Day's reading and her renting a room in a devout Catholic household in the 1920s drew her closer to Catholicism, but life and work would take her to New Orleans, then back to Staten Island, before she became fully committed to the faith she would later fiercely defend. 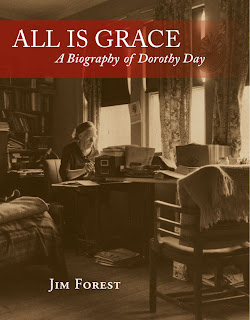 It was the birth of her only child, daughter Tamar, and the desire to have her baptized that brought about Day's own baptism into the church whose practices she had been loosely following for years. Not wanting Tamar to "flounder as I had often floundered," Day would write in later years: "I wanted to believe, and I wanted my child to believe, and if belonging to a church would give her so inestimable a grace as faith in God, and the companionable love of the saints, then the thing to do was to have her baptized a Catholic."

Tamar's father, with whom Day lived for a few years, approved of neither marriage nor religion and they eventually parted ways after her conversion. (In a moving chapter in the book - and in Day's life - she later selflessly nursed, at his entreaty, the woman he had subsequently lived with for several decades, who was dying of cancer.)

Dorothy Day, of course, went on to found the Catholic Worker movement, which would combine her faith with commitment to the poor and social justice. Launched in 1933, in response to the Great Depression and its economic devastation, the movement's publication, The Catholic Worker, was brought about through like-minded Peter Maurin, a French-Canadian immigrant. It was he who convinced Day that what was needed was not a bloody revolution as had taken place in Russia, but a peaceful revolution spurred by a radical Catholic publication that would publicize Catholic social teaching and show how to follow it.

Soon the new publication was attracting the first of what would become veritable legions of volunteers, helping with the paper and with the houses of hospitality known as Catholic Worker Houses which sprang up to feed, house and clothe the homeless and destitute across the nation and beyond. There were also experiments in farming communes.

Espousing voluntary poverty and regarding what little she possessed as being "on loan," Day continued to work tirelessly to bring about the just world she envisioned, one in which all would see the face of Christ in the faces of the poor, the condemned, the marginalized. On the day her soul slipped away, Nov. 29, 1980, she was worrying about the survivors of an earthquake in the mountains of Italy.

When Cardinal O'Connor convened a gathering to discuss the possibility of promoting her for canonization, one of her fellow Catholic Worker staff members perhaps summed it up best. "If Dorothy Day was not a saint," he said, "it is hard to know what meaning that word should have."

Some years ago I read Robert Coles' Dorothy Day: A Radical Devotion. Just a few years ago I read Paul Elie's The Life You Save May Be Your Own: An American Pilgrimage, which interwove the lives of Dorothy, Walker Percy, Thomas Merton and Flannery O'Connor. I also read The Dorothy Day Book edited by M. Quigley and M. Garvey. I found all those books quite enlightening and nourishing. All Is Grace: A Biography of Dorothy Day, however, leaves me searching for words of praise.

I had read Jim Forest's biography of Thomas Merton, Living With Wisdom, so I knew when starting All Is Grace that I was in for a riveting adventure. By the time I finished this book I felt that I had come to know Dorothy extremely well.

Jim Forest and those who helped him in putting this book together have created something that is definitive and masterly. As he mentions near the end of the book, Dorothy Day is still a person who shakes up the lives of those who get to know her. While I am humbled and put to shame by her life and faith, I rejoice in the knowledge that she existed and lived her life so close to the ideals of the gospels.